A few years ago, Bill Stixrud and Ned Johnson started noticing the same problem from different angles: Even high-performing kids were coming to them acutely stressed and lacking motivation. Many complained they had no control over their lives. Some stumbled in high school or hit college and unraveled. Bill is a clinical neuropsychologist who helps kids gripped by anxiety or struggling to learn. Ned is a motivational coach who runs an elite tutoring service. Together they discovered that the best antidote to stress is to give kids more of a sense of control over their lives. One recommendation for accomplishing that? Introduce children to the Transcendental Meditation technique. Here’s an excerpt from their new book, The Self-Driven Child.

At a recent workshop for mental health professionals, Dr. Bonnie Zucker gave a presentation on the treatment of anxiety. She asked the audience if they meditated on a regular basis. A handful of people raised their hands. Dr. Zucker then said, “Meditation is so powerful that I ask all of you who don’t yet meditate to learn meditation— and then call me in a year to tell me how it’s changed your life.”

We couldn’t agree more. Practicing meditation is increasingly important as changes in the world trigger higher levels of anger and fear and advances in technology quicken the pace of life, giving us little time to simply “be” with ourselves. Although kids rarely beg their parents to find them a meditation teacher, research indicates that when they establish a practice, meditation benefits them just as it does adults.

The physiological state TM produces, known as restful alertness, is distinct from sleep or from simply resting with your eyes closed. A number of studies have found that the depth of physical relaxation one can reach during the practice of TM is in several important respects (e.g., oxygen consumption, basal skin resistance) greater than that obtained during sleep. This deep rest allows the nervous system to recover from the negative effects of stress and fatigue. It also makes the stress response system more efficient, adapting to stressors and turning off quickly. With a more efficient stress response, young people are able to “let it go” and recover faster. Some studies have suggested they can do this as much as twice as fast, thereby increasing their stress tolerance and resilience, two powerful predictors of academic, career, and life success. A marked increase in the coherence of brain wave activity accompanies the state of relaxed alertness. This, in turn, is associated with improved attention, memory, and abstract reasoning ability. 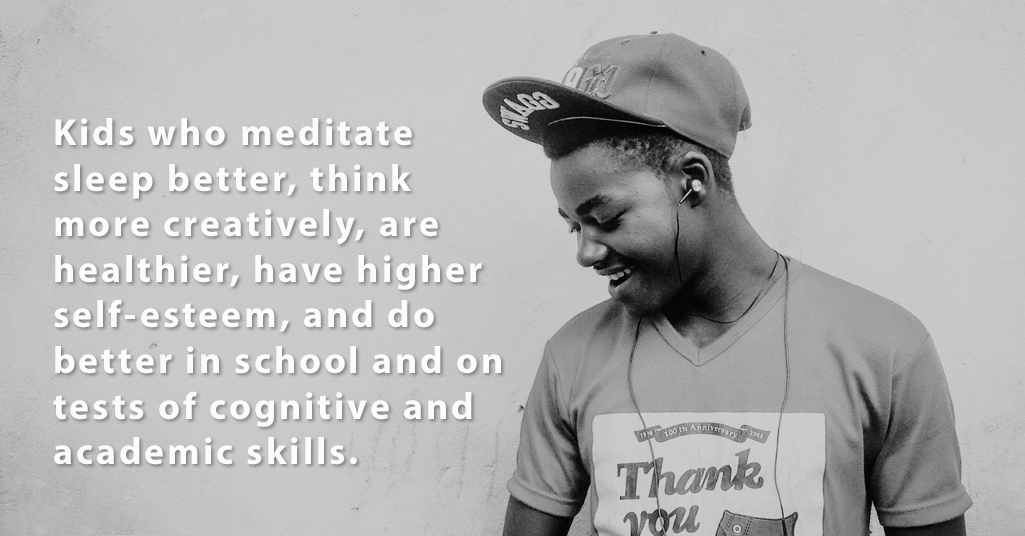 Alpha waves are relatively slow brain waves that are associated with relaxation. We can see someone’s brain waves when they’re hooked up to electrical sensors, as Bill was as part of his training in biofeedback at the University of Tennessee. Sensors were attached to his skull and he was asked to close his eyes. Three or four seconds later, the doctor monitoring him said, “Holy moly.”

“Nothing,” the doctor said. “The second you closed your eyes, you had this beautiful burst of alpha waves.” Bill told him he had been meditating for twenty- five years.

All those years of meditating had given him a brain that functioned differently. Bill found this particularly affirming in light of the fact that he used to be one of those people whose presence stressed people out.

Many years of research on TM has shown that kids who meditate for as little as ten or fifteen minutes twice a day will experience a significant reduction in stress, anxiety, and depressive symptoms and express less anger and hostility. They sleep better, think more creatively, are healthier, have higher self-esteem, and do better in school and on tests of cognitive and academic skills. While TM involves no attempt to control the mind, it increases practitioners’ internal locus of control. It does this, in part, by allowing the brain to refresh itself, which enables it to keep things in perspective. It also reduces the extent to which we feel overwhelmed and allows our minds to work more efficiently, increasing the effectiveness with which we tackle challenging situations and our confidence that we can handle the challenges life throws our way. The Quiet Time school program, in which students meditate [with Transcendental Meditation] for fifteen minutes twice a day, has made a profound impact on students in underserved urban schools, many of whose lives are filled with violence, fear, and trauma.

Note: Children as young as 10 can learn the TM technique, and younger children can sometimes learn on a case by case basis. For more information, speak to your local TM teacher!