The streets looked a bit rough, I observed as the bus pulled into La Plata, Argentina, around 50 miles (56 km.) south of Buenos Aires. I did have friends here, though. There were likely some sweet times in store, regardless.

Not finding anyone I knew at the bus station. I walked out the front door and looked down the street. No one. Coming back in, I nearly bumped into Carlos! My friend, whom I’d first met in 2010 at Meher Baba’s Samadhi in India, and who’d welcomed me to Buenos Aires four days ago, had come through again.

Carlos’ friend Pablo, another Baba devotee, was waiting in his car. As we drove towards my hotel, I began to see livelier parts of the city.

Pablo didn’t speak a great deal of English, and I was limited in Spanish. I continued gamely using my phone app, with limited success. Bilingual Carlos—who’d once told me, “I had 4 great English teachers named John, Paul, George and Ringo”—saved the day. Through his translations, I learned that Pablo is a drummer, a clown and a psychotherapist. The fact that Pablo looked a little like an American Baba friend of mine also contributed to the nice connection I felt with him. 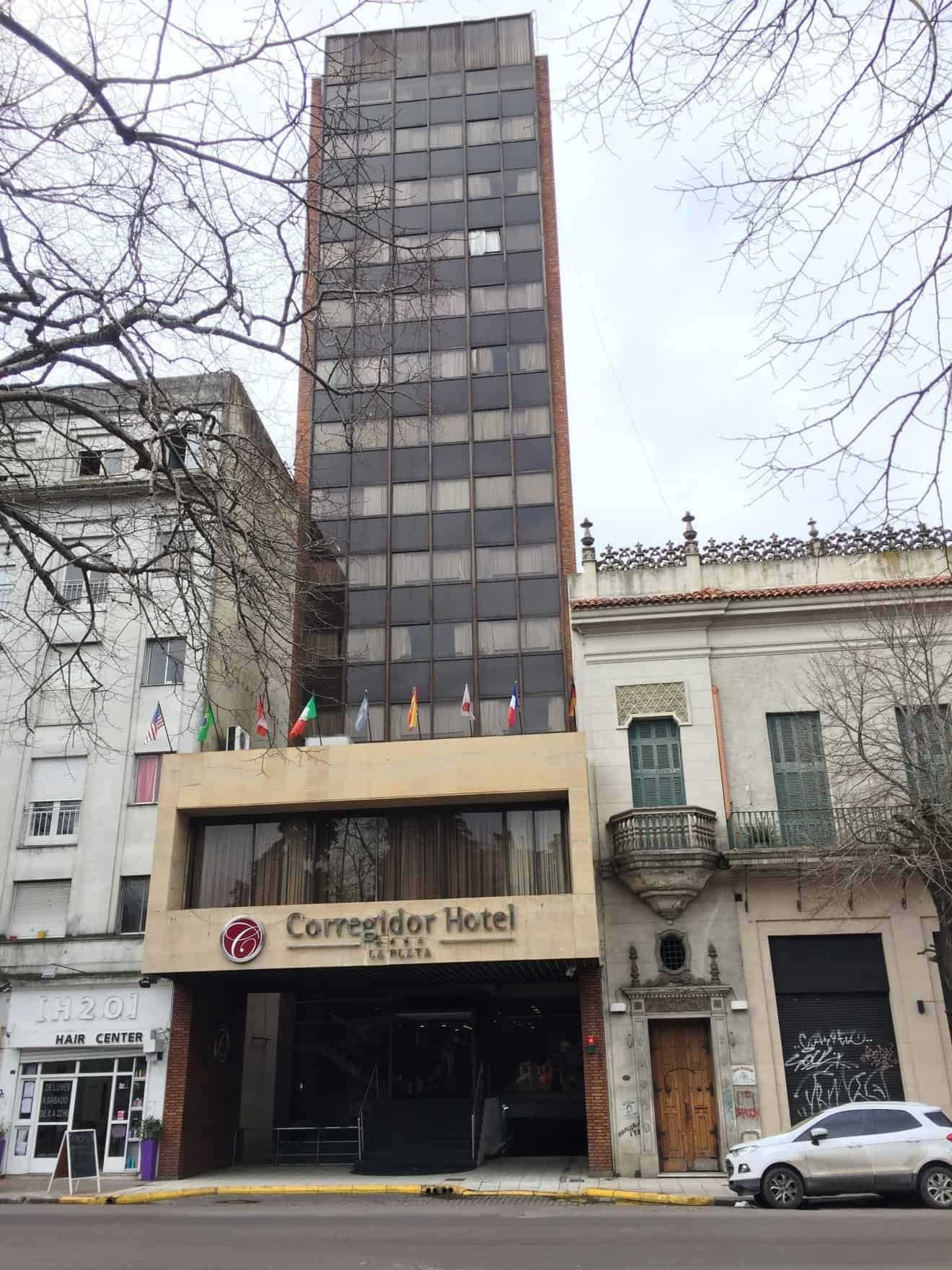 The Corregidor Hotel: perfect except for a missing bathtub plug, a matter rectified immediately by a phone call!

I’d booked four nights at the Corregidor Hotel, 10 or so minutes from the bus station. The impressive building sat in a pleasant location across the street from a park-like square called Plaza San Martin. 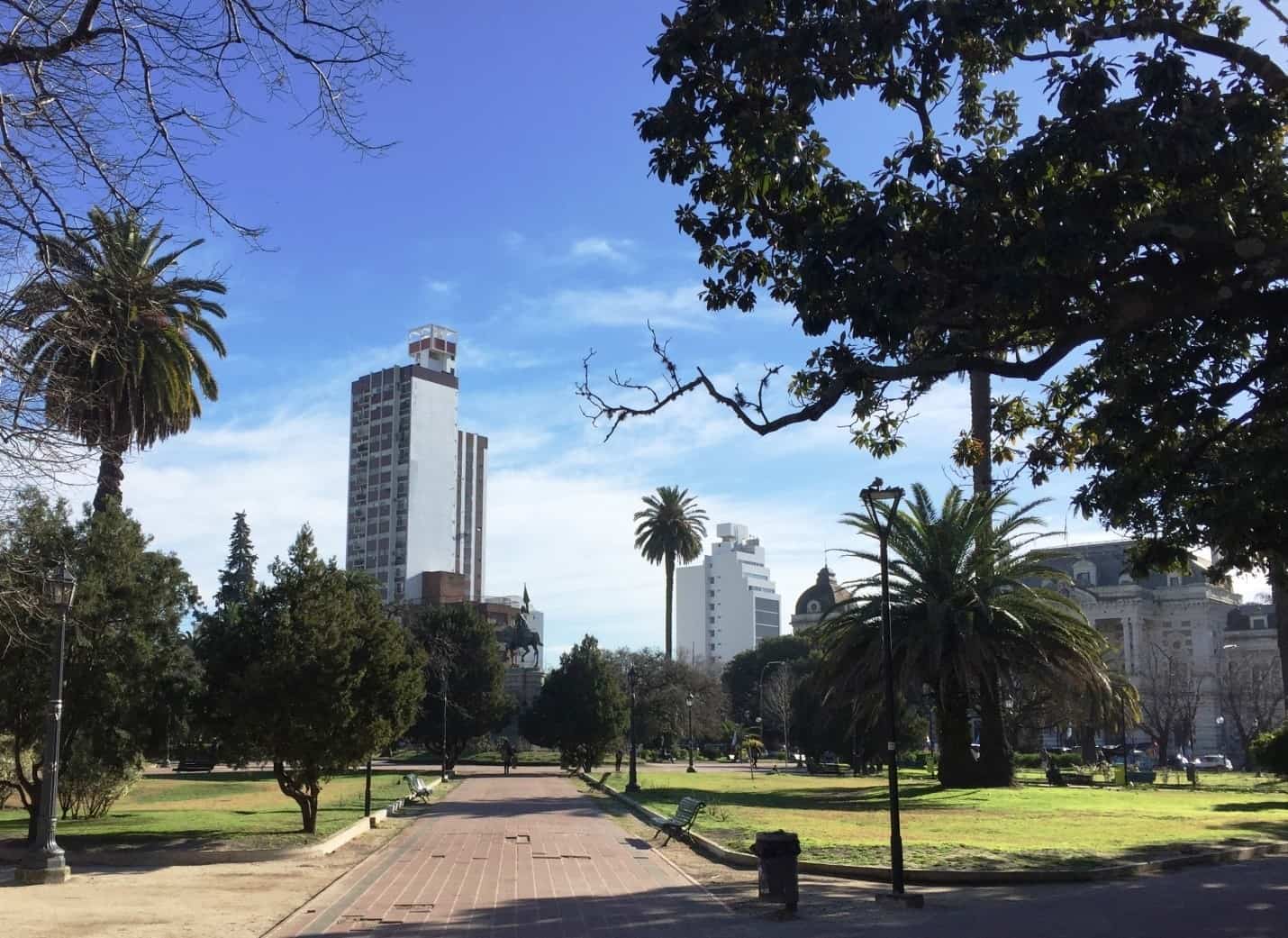 Plaza San Martin, named after the liberator of Argentina, whose statue appears near the photo’s centre.

As in Montevideo, I arrived at the hotel before check-in time. The friendly desk clerk here, too, tagged my bag and stored it. Carlos, Pablo and I walked around the corner to a favorite hangout of theirs.

Over beer and a snack, my friends told me more about the Meher Baba group in Argentina. There are “Baba-lovers” all over the country, including in the city of Ushuaia in the far south. However, the largest concentration is  in La Plata. Those who could make it were planning a Sunday gathering that I was looking forward to.

Left: Modelo, where the author and friends enjoyed several meals or snacks. Right: The Modelo wall logo including, as Carlos pointed out, a figure resembling Meher Baba, and also Baba’s birth year!

Carlos and Pablo constantly referred to a place they called “the temple in the forest,” promising to take me there. I had no idea what they were talking about.

“The temple in the forest”

Pablo had to leave for an engagement elsewhere. Carlos and I set out on foot to tour his hometown. Our walk centred on a lovely green area named Saavedra Park, which contained the zoo, botanical garden, and natural history museum.

We passed an elderly couple cooking choripan sausages on a grill. My stomach suddenly refused to go any further. I bought one and ingested it as we continued our stroll. I can scarcely recall a sandwich so satisfying! 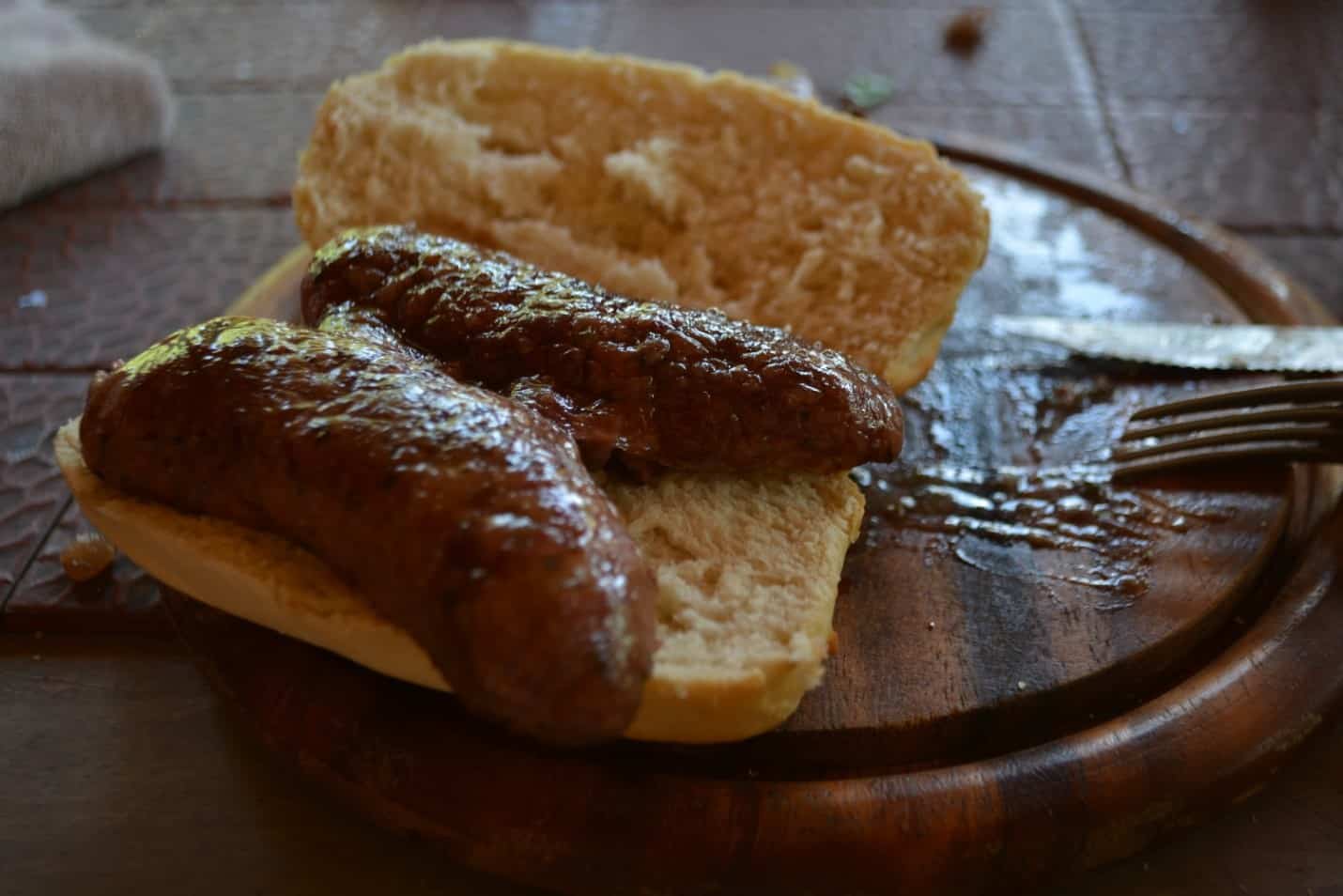 A chorizo sausage sandwich, exactly like the one bought from the elderly couple.

Suddenly, I heard a rumble in the distance. It grew louder as we walked. Finally, we stood before the back wall of a large stadium whose exterior was painted light blue.

Grazing in a grassy grove across the street from the structure were about a dozen police horses. Over by the street were a number of camouflaged officers. Far to the left, I realized with some consternation, were about twenty riot police with combat shields and helmets. Some carried what I believe were automatic rifles.

The rumble erupted once again. It came from inside the stadium. The fans of one of the teams playing futbol (soccer) inside made it sound as if the game were war! The police presence around us made it look that way, too, although the officers were laughing and joking.

“Here it is!” said Carlos. “The temple in the forest!” He went on to explain that his favorite team, Gimnasia y Esgrima La Plata, was engaged in a battle with their rival local club, Estudiantes de La Plata. Here are two short videos of the scene:

Shops along Calle 12, a busy commercial street in La Plata.

Back at the hotel, I had my usual bath and nap. I woke at around 5 p.m., full of energy. Picking up my walking stick, I went outside to the corner, turned right and decided to just keep walking along that street, so as not to get lost.

After five or so blocks, I found myself alongside a park-like square similar to the one by the hotel. This one had an enormous Gothic church—quite unusual for Latin America—at one end.

Far across the green, I saw many white tents. An amplified voice, like a circus ringmaster’s, blared from that direction. I imagined a political rally, and did not interrupt my walk.

At the far end of this plaza, I crossed a very busy commercial street. Many of its shops seemed to be outlet-style clothing stores. I wasn’t looking for clothes, but turned anyway. The late Saturday-afternoon bustle felt promising. Perhaps I’d find a branch of the Havanna coffeehouse chain that Carlos and I had patronized in Buenos Aires. 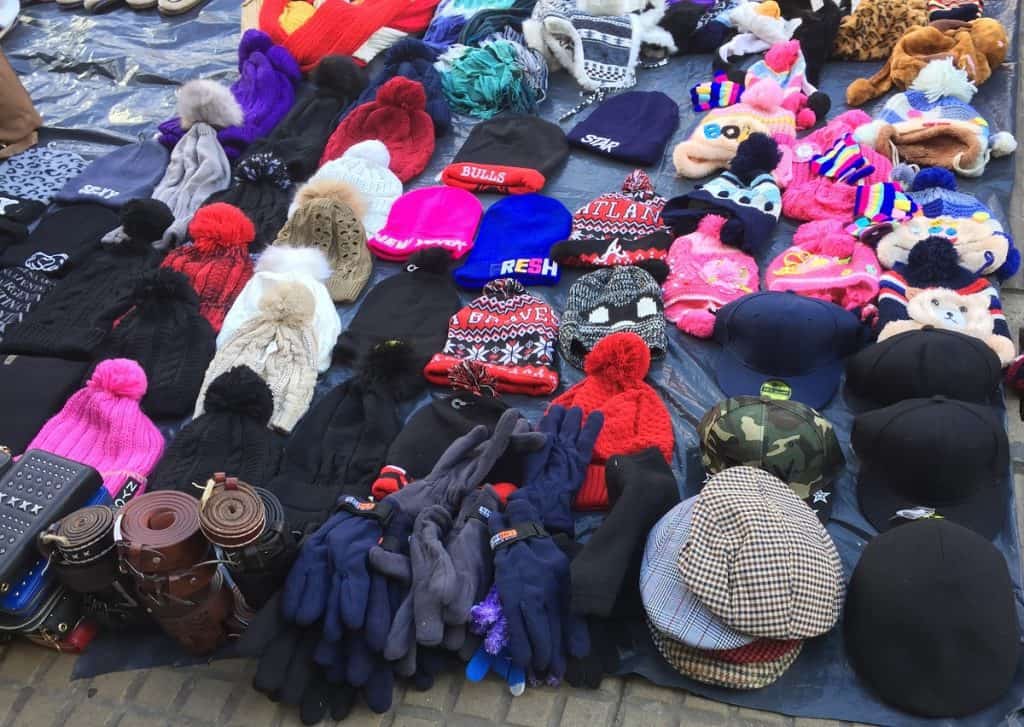 The wares of street merchants line the sidewalks outside the shops along Calle 12.

Eventually, unable to find one, I sat down at an outdoor table at another café. After having a tarta and a drink, I started back toward the hotel. Thinking my “night out” had all but ended, I was about to discover it had scarcely begun! 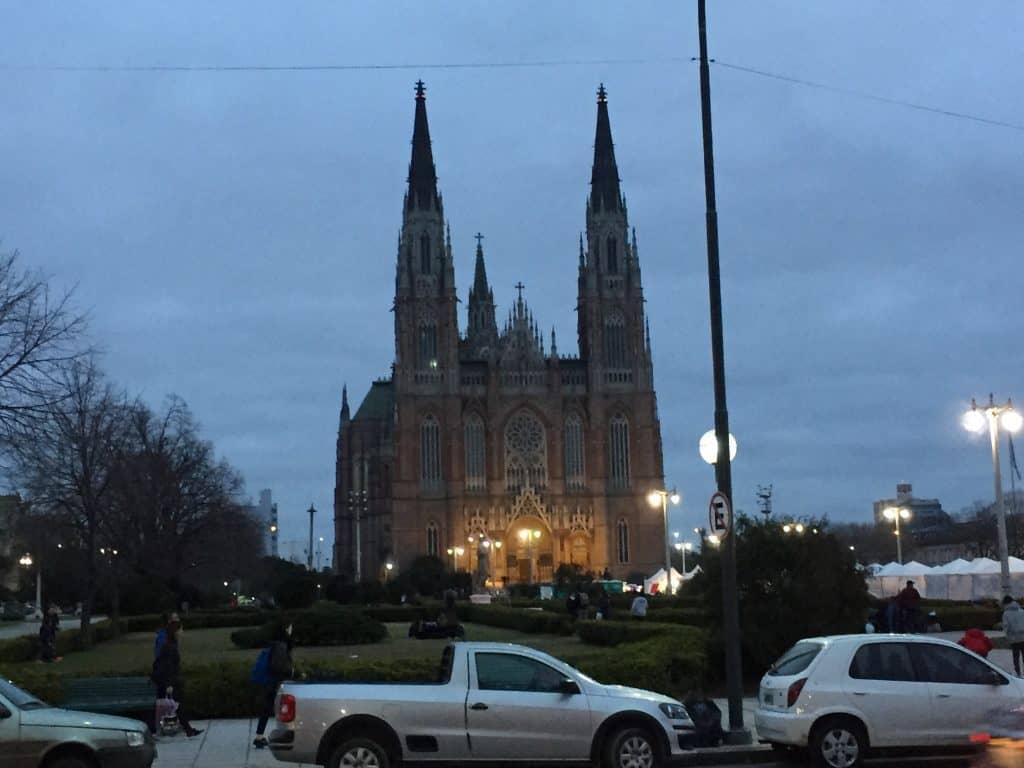 It was dark when I got back to Plaza Moreno, the big square with the church. I could hear the same tacky announcer’s voice booming from down by the white tents.

Then the voice stopped. I heard African drums! Maybe it wasn’t a political rally or children’s event. I felt tired, but my inner voice kept saying, “This trip is for discovery! You might be missing something wonderful!”

As I veered over to that corner of the plaza, a large stage came into view. Several hundred people were standing in front of it. The drums, which had stopped, started up again, adding recorded music this time. A group of colourfully attired young women sambaed onto the stage. They were good! I stayed and watched their whole performance. 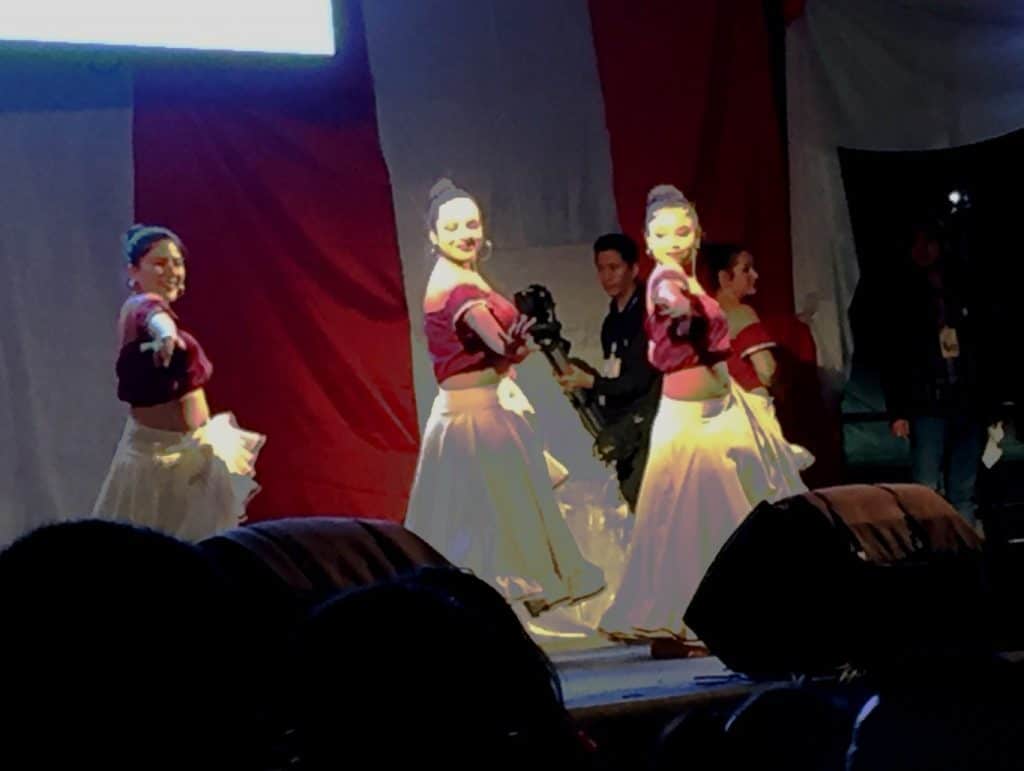 The emcee returned and announced another group. This time, the instrumental music included flutes. The skillful dancers were arrayed in all the colours of the rainbow!

After watching several acts, I began strolling around the tent area. I learned from a sign that I was at the Peru Vive! festival. The booths featured a wide variety of Peruvian foods and crafts.

Many, many Peruvians live in Argentina, it turns out. I myself would be going to Peru in several days, and this preview excited me! 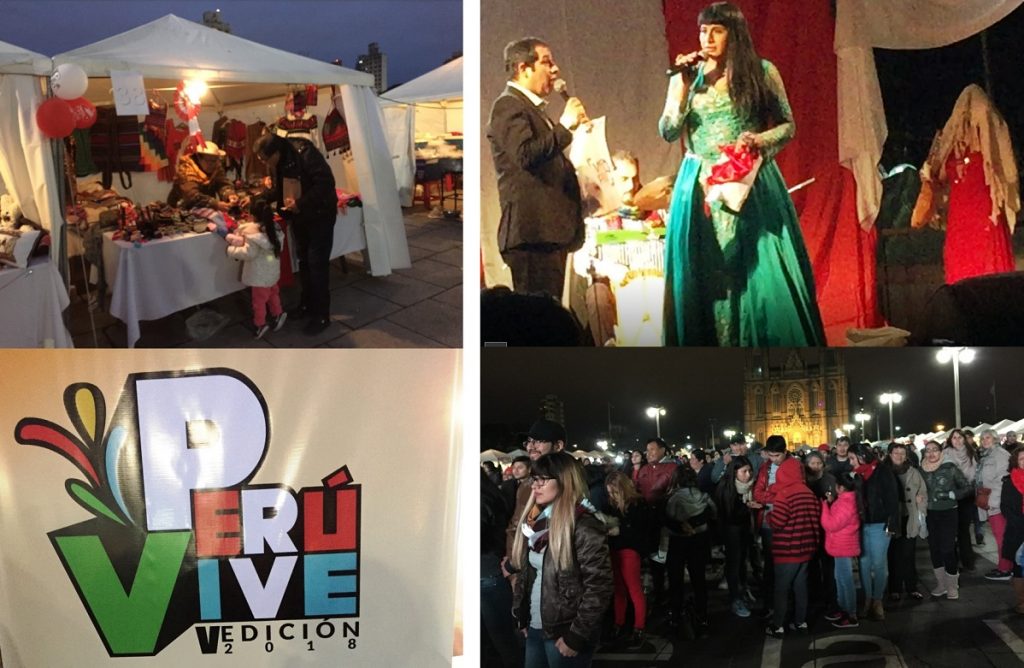 Top left: A Dad and a craftsperson lovingly attend to a little girl. Top right: The two comic emcees, who sounded a bit like used car salesmen, though the acts they introduced were of high quality. Bottom left: The colourful logo of the “Peru Vive!” festival. Bottom right: Part of the crowd near the stage. In the background is the Cathedral. Some white booth-tents can also be seen.

It’s easy to lose track of days of the week while travelling. However, Sunday morning is usually pretty obvious. Nearly everywhere, things get going a good deal later. 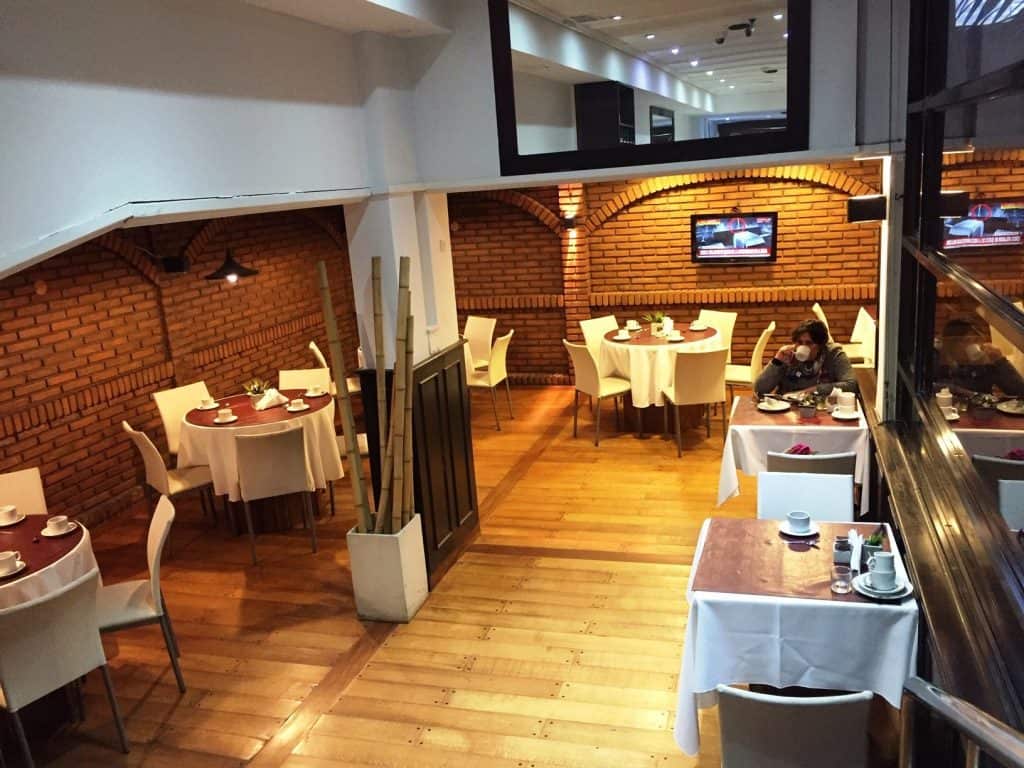 I rose early as usual and had breakfast in the Corregidor dining room. When I went outside, the streets were nearly deserted. I took a long walk in the all-but-unknown, still sleeping city.

Above: an impromptu video of the author singing a verse of Kristofferson’s “Sunday Morning Comin’ Down” on the La Plata streets.

Back at the hotel, Carlos picked me up in a taxi at noon. His sister was having a family lunch in honour of my visit! 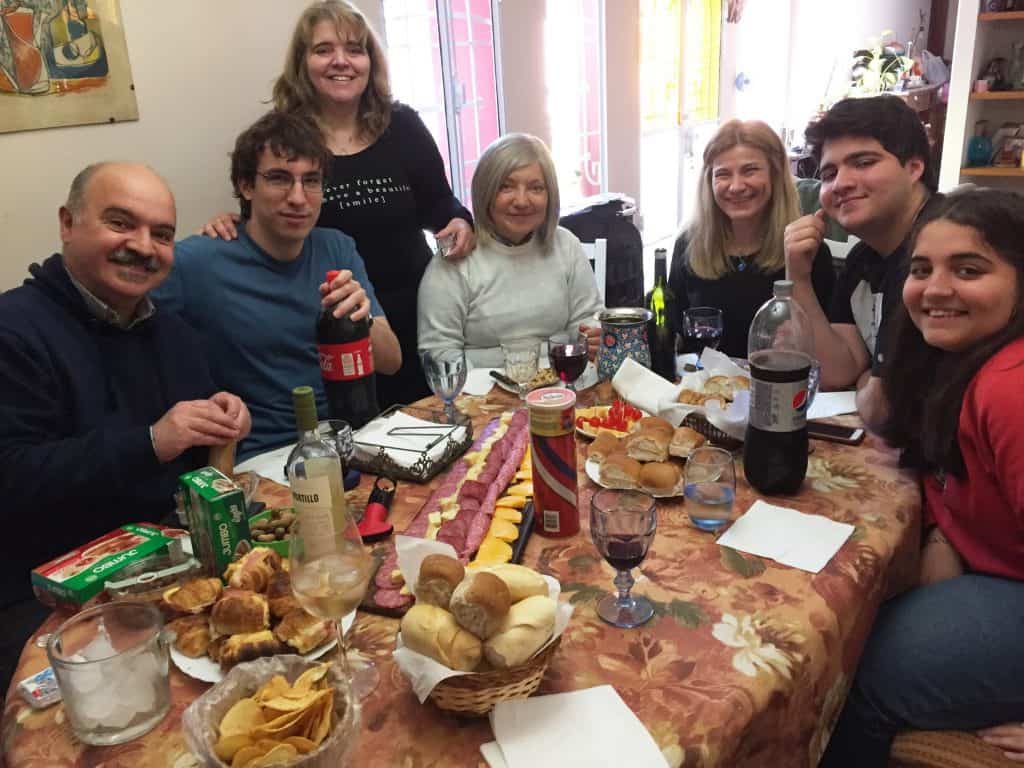 That magic of true hospitality manifests when you’re with someone’s family and you feel like it’s your own. That’s what happened. Gabriela was a gracious, cultured host.

I felt connected to everyone. Juan Tomas is interested in designing video games. He was excited to hear that my stepson Victor had worked for Electronic Arts in the San Francisco Bay area. Clara had recently returned from a year in Great Britain. Her English skills were excellent and helpful. Marina is a professor of Art, and so we had things to share about that subject.

And the food! Simple jimon y queso con pan y panecillos (ham and cheese with bread and rolls) never tasted so heavenly, nor did empanadas. Then came the desserts. 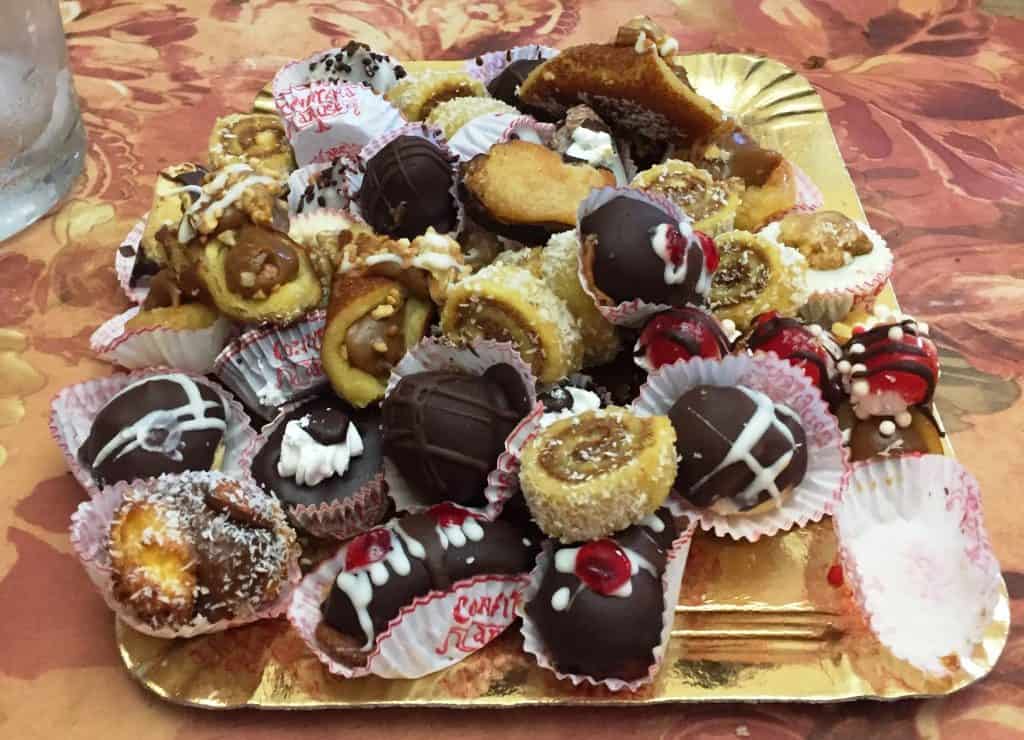 Another kind of family gathering!

After a couple hours’ rest back at the hotel, Pablo picked me up and we drove to get Carlos. He brought with him a special box containing a Sadra (gown) that the God-Man, Meher Baba, had worn. Baba’s sister Mani had given it to Eduardo Nunez, who later passed it on to Carlos. 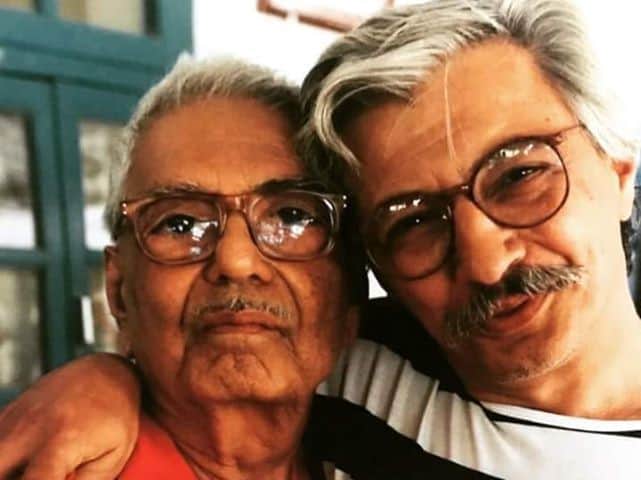 The late Eduardo Nunez, AKA “Qui Qui,” in India with Eruch Jessawala, one of Baba’s closest mandali, (disciples). Eduardo was the first Argentine “Baba-lover.”

The get-together took place at the home of a devotee named Marcela. The photos of Baba, the art,  the spread of Argentine bread, wine and cheese, and the arriving “Baba-lovers” (even though several people were unable to make it) created a lovely atmosphere. 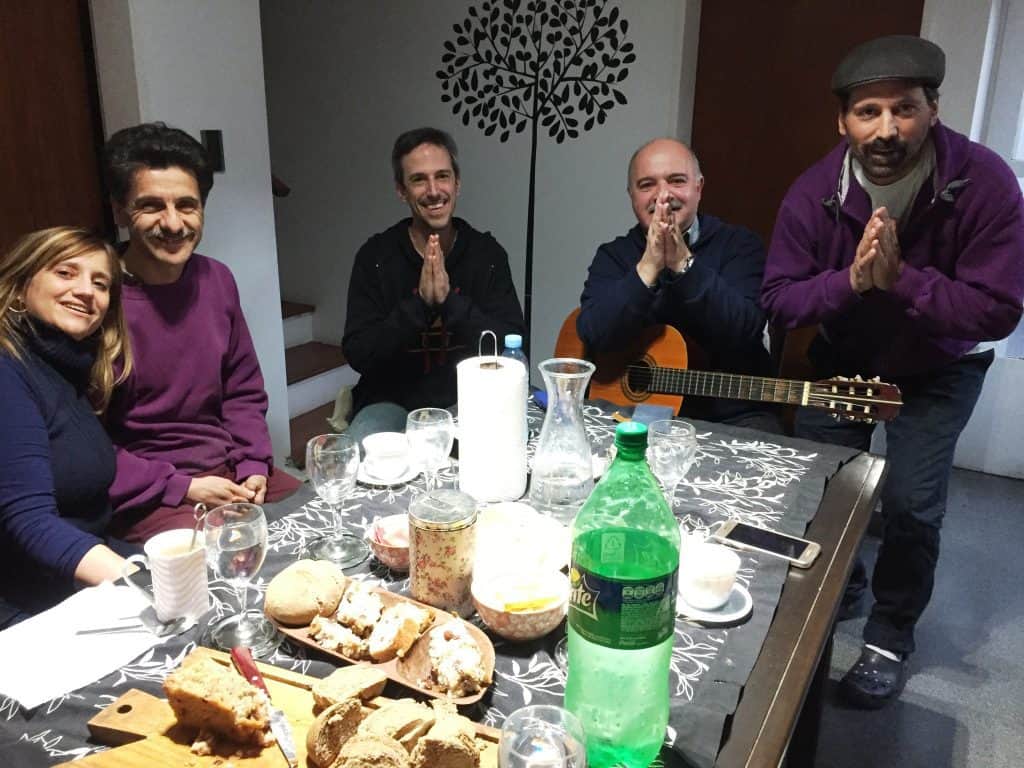 After an hour or so of snacking and conversation, facilitated by both Carlos’ and Marcela’s bilingual skills, the guitar began making its rounds. Nearly everyone took a turn singing, and in most cases, playing guitar as well. It was almost as I’d imagined an Argentine Baba get-together: intoxicating music, food, drink and company. 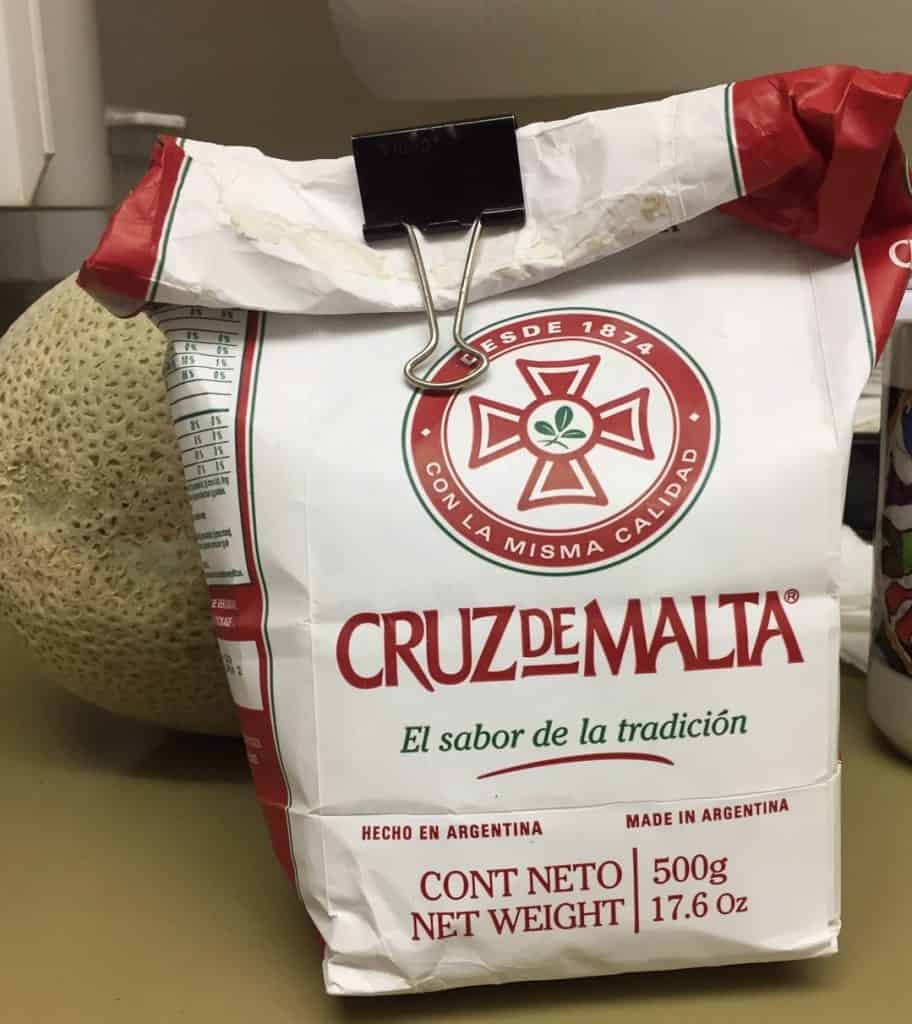 As we took turns doing music, the yerba mate began making rounds of the table. People took turns sipping Argentina’s national drink through the traditional metal straw. I’m a mate drinker, myself, but unlike my Argentine friends, I add milk and sweetener.

Still, I wanted to take part in the tribal ritual. When the thermos came my way, I took a pull; but only during the first round. The blend was indeed a bit strong for my taste.

After a day overflowing with joy, Nicholas drove me back to the hotel. I slept the sleep of the grateful. Two and a half days of adventure in La Plata remained, and then—on to visit my friend Claire in the Peruvian Amazon region.

This last week-long leg of my trip would be a little different. I would be staying not in a hotel, but in a grass lodge run by a working shaman.

This travel-writer was on the move for weeks! To read about where he went previously, visit FIRST (AND LAST) TANGO IN BUENOS AIRES: Travels in Latin America [Part 6]»

To start at the beginning of the series, visit THE WONDERS OF OAXACA: Travels in Latin America [Part 1]»